"Our hope for climate justice is becoming an utopia" 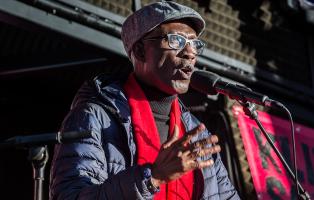 I couldn’t imagine a minute how freezing it could be here because I come from a continent that is boiling hot – between 35 to 45 degrees. Had I known I would have brought some sunlight to warm you up. Anyway, let me tell how proud I am to be part of this gathering that wants to say to the leaders of the world: Enough Is Enough!

Today, it is worldwide admitted that climate change has destroyed the lives of millions of people throughout global south. Their livelihoods are being continuously jeopardized. It has reached its climax.

The impacts are so drastic there, we may, in a very near future, have "Africa without Africans" – a ghost continent. I have met "dead people walking". They have no more perspectives locally and the only solution left is to go, to migrate. They tried it locally, regionally without any success and the option left is global north. No FRONTEX, no barbed wire walls, no police violence can prevent that flood to invade you.

From Copenhagen to Paris and recently Marrakech our hope for climate justice, let’s say for social justice, is becoming an utopia.

Remember the 2008 banks financial crash: Only 4 great political world leaders met in emergency and  refueled them. They said "These banks are too big to fail". What about the 100 billion dollars a year for the global south adaptation fund? We are still waiting and they seem to say: "These are too weak and poor to live". It’s a pity they refuse to learn from history.

The time for action is now, tomorrow will be to late! Too many children, too many women and men have died and are still dying while leaders go on chatting, parading, taking their time. Open your eyes, leaders of our world! We all live in one global village and while your neighbors compound are on fire you look at elsewhere. What a cynical behavior! How many drowned and how many corpses along the Mediterranean shores will it take till they know that it high time to act?

Time for endless politico-diplomatic talks is over!

The results of fossil energy on humankind can be compared to a crime against humanity. So we address the industrial and emerging countries to leave the oil in the soil. USA, Great Britain, Germany – shut down all these coal-fired power stations!

Green is the future so let’s start now! Let us  live climate justice in solidarity for the exclusive benefit of the peace of the world.